I must admit I am very proud to be an Australian but an Australian that has had family members that have represented our country in the Australian Defence Force. I am fortunate enough to have had two relatives serve at Gallipoli and lucky that both survived. My Great Grandfather on my mother’s side, PTE Frederick BISHOP, was with the 13th Bn, AIF and was wounded during the early stages of the fighting in May 1915. He would recover and serve again with the 45th Bn, AIF on the Western Front before returning to Australia after the war. My other relative, my first cousin three times removed, was LTCOL Henry William BRYANT- the first Commanding Officer of the No 1 Australian Stationary Hospital. This is the drive and passion behind the book. I wanted to recognise the work that my relative, as well as the other men and women, that served with this hospital did to support the war effort during WWI. 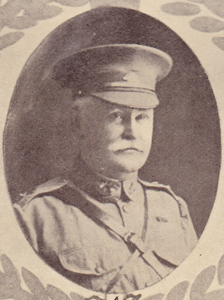 Henry was an old man when he went off to war. I assume it would not happen today but at the age of 65 he became a Commanding Officer of a hospital being sent to the front. From all reports he did a marvellous job and was mentioned in dispatches twice for his service at Lemnos. However he battled dysentery for a number of months which cannot be good of someone at that age, on an island with little or no water and not having a balanced diet. This was all compounded when news arrived at the Front that his wife has passed away whilst he was overseas. It would have been a very difficult time for Henry and more difficult to recover. He was invalided home in late 1915 where he went back to his medical practice. However he never fully recovered and passed away only 6 years later in an Anzac Hostel. I am proud of Henry’s service and the service of the men and women of the No 1 Australian Stationary Hospital. This Anzac Day I will think about them and what they endured during WWI.